I didn’t expect a pandemic. Even if I had, I have always proudly believed that we are an exceptional country, and I didn’t expect America to fare so poorly.

My family and I coped well. Tasia works from home; her requirement to go into the office once a week fell by the wayside. I’m retired from my government career, so I don’t have to go out. Our pay, pension, annuity, and social security benefits appear in our bank account at regular intervals, like magic. We’re both introverts and found it easy to stay in with each other and our son, Shane. 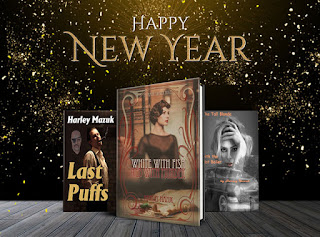 Poor Shane finished his B.S. in Chemistry in the early spring, and actually got a lab job in the early days of the pandemic when millions of others were losing their work. Sadly, it didn’t last, and I feel sorry for him, a recent grad stuck in the house for months with his parents. I think he’s being considerate of us, and doesn’t go out much or take chances that might kill us, but what sort of life is that for a young single man?

Our daughter, Molly, lives near Austin, Texas, in a county that's done well with Corona. Her young man, Tex, proposed and they've set a date for 2021 at the Driscoll. I'm raising funds for a wedding.

I stopped going to the gym around March 15, and what little muscle I had has melted away. Today, I’m ten or eleven pounds lighter than I was this time in 2019. It’s not just the loss of muscle from not working out—I suffered a mild attack of pancreatitis in July, stopped drinking (again), and really lost weight then.

Though I’m shocked about the loss of muscle, I’m happy about losing weight—I look better, feel better, my pants fit better, and even my balance has improved. I’ve been out there running, about three miles a day, about five days a week. The weather has had its usual ups and downs, but it was good enough that a snowstorm the week before Christmas was the first time I missed two days in a row during the pandemic. This has been my most consistent streak in the last 30 years. (Been a runner since ’78.)

We live in the ‘burbs, and I can roll out to run without a mask—early in the hot weather, around mid-day since November. After the first couple weeks I realized I didn’t need to pass within six feet of anyone. Traffic is light, and if other peds approach, it’s easy to cross the street.

I had a physical in August, a bad tooth pulled, a blood draw, and a skin-cancer checkup with my dermatologist in the fall. I’m frequently stiff. My lower back used to hurt occasionally. Now it hurts more regularly. But all in all, I feel well, just old.

I was 72 a couple days ago, just after Christmas.

I stopped going to my classes at Johns Hopkins for Old Farts (JHOF) around March 15. After closing a couple weeks, JHOF resumed via Zoom, and I finished the spring semester without much enthusiasm. I had no camera on my mojo box, so I had to borrow Tasia’s laptop. I acquired a webcam, and reluctantly returned to school for fall semester, but things picked up. Zoom classes were more enjoyable. In fact, with all the isolation, I think school was a good discipline. I needed to get upright and sit at the computer six to eight hours a week (I cut a few classes 😊).

I was developing a short story, “The Purple Journal,” early in the year. I had shared a bad, early version with my writers’ critique group in 2019, and after getting their feedback, I felt I did a great job revising it. I’m up to 21 rejections now.

I finished a first draft of my third novel, The Fall of the Hotel Biarritz. It’s basically an action story, a little over the top, in the manner of “The Gutting of Coffignal,” “The Big Knockover,” or Cotton Comes to Harlem. I decided to see if it was good enough to get the support of an agent, and it did—I signed with the Lawrence Jordan Agency. Lawrence seemed to genuinely enjoy reading my draft and had some ideas for turning Biarritz into the start of a swell career for me. Having flopped around like a flounder in my approach so far, I welcome his help. I was hoping my swell career might be further along by now, but I don’t think Lawrence has pitched the book yet.

Somewhere in here, I fired my writers’ critique group. They were good, but, man, the pandemic doesn’t make things easy—especially social interaction.

Lawrence Jordan put the idea in my head to try my hand at a thriller. I thought of making a baby-steps transition from what I write now to thriller, and I wrote “Friends of Durruti,” a “men’s-action-adventure,” suitable for True or Argosy. Unfortunately True folded in 1974 and Argosy in '78. “Durruti” is a prequel of sorts, Frank Swiver’s first investigation, a risky venture which he undertook in 1937 at the front in the Spanish Civil War. It’s a bit of an espionage story and a historical fiction, in which Frank crosses paths with Soviet General Kléber and his NKVD commissar Alexandr Orlov.

“Friends of Durruti” is the first work I’ve tried to push out without benefit of review of a writers’ critique group. Working with such a group though is not merely a matter of accepting a bunch of suggested edits—it’s about learning how others perceive your work, and how to read, edit, and revise accordingly. I’ve tried to apply what I’ve learned in my groups the last eight years.

Three rejections for “Durruti” so far. Which means I haven’t had a sale this year.

We expected Molly and Tex up here in Md. for Christmas. Prior to Christmas, Molly tested negative; Tex tested positive. Like so many others, they didn't travel, and like so many, we spent a quiet Christmas without loved ones. But Molly and Tex (really Mike) are both all right now, thank goodness. We missed you, Molly and Mike.

I’ve read more than usual during the plague. I’m a slow reader, so even more than usual isn't a great deal. But this year I benefited from Audible and recorded books. Usually I get a paperback and read along with the recording, but not always. I finally read The Magus, by John Fowles, which I’ve struggled to finish for years. The Magus, and Blood on Snow, by Jo Nesbo, were so well-written and so well-read that I didn’t need to follow along. I listened on my walks. (Patti Smith read Blood on Snow in a lower-East-Side deadpan that was perfect.)

I read The Girl in the Green Raincoat, by Laura Lippman, The Daughter of Time by Josephine Tey, The Winter’s Tale and The Tempest by William Shakespeare, a graphic novel version of The Great Gatsby, and The Case of the Careless Kitten by Erle Stanley Gardner. The Daughter of Time had no pace and went on for an epoch. The Shakespeare was disappointing, but Gatsby was great, and my introduction to Perry Mason was fun. My second reading of Cotton Comes to Harlem in early December was a bit of a revelation. Chester Himes was better than I remembered.

I read along with the Audible versions of Died in the Wool by Ngaio Marsh, The Safety Net by Andrea Camilleri, and The Snow Was Dirty by Georges Simenon. I could do a whole blog post about Dirty Snow, . . . and maybe I shall, in 2021.