Yes, I’m a big fan of mystery short stories, not only the hard-boiled work of Raymond Chandler and Dashiell Hammett, but even the Victorian-era Sherlock Holmes stories of Arthur Conan Doyle. I have also long been enamored of the short fiction of W. Somerset Maugham. It doesn’t hurt that Chandler apparently read Maugham and gives him a tip of the hat in his great story, “Red Wind.”

I have four Penguin volumes of Maugham’s stories, (including Volume 3, the adventures of Ashenden, a secret agent of the British intelligence department during the First World War). Though his prose often seems old-fashioned and formal, he could always tell a story in a clear and straightforward manner. His stories teem with hypocrites, drunks, and murderesses. Although I pattern my writing more after Hammett and Hemingway, I have even tried my hand at a couple tales done in the style of Maugham. His stories often concern morality or moral principles and hypocrisy. People act out of passion, just as in a good murder mystery.

I won’t say Maugham’s stories are plot-driven rather than character-driven, but I believe they are more often about the tale he tells rather than about the moment of epiphany (as in the more “modern” style of Joyce or Chekov). The story itself seems paramount in the telling. What I like best about Maugham’s work is that they are melodramatic, and often heavy with irony.

Perhaps serendipitously, our movie in film class this week was The Letter, starring Bette Davis, based on Maugham’s story and stage play of the same name. Maugham had a habit of inserting thinly-disguised characters from real life into his literary works—such as Paul Gauguin in The Moon and Sixpence—and “The Letter” was based on a real-life scandal involving the wife of the headmaster of a school in Kuala Lumpur, who was convicted in a murder trial after shooting dead a male friend in April 1911.

In the original story, the female lead, Leslie Crosbie, shoots and kills a man named Hammond, who she says tried to rape her while her husband was away for the night. Leslie was “fragile . . . graceful . . . delicate . . . quiet . . . pleasant [and] charming.” She seemed well-suited to the lonely life of a planter’s wife in remote Malaya. In any event, “She was the last woman in the world to commit murder.” The British community in Singapore learns after his death that Hammond had taken up with a Chinese woman. Thus the white planters are quite prepared to accept Leslie’s story that Hammond was a sex-crazed rapist. Leslie is jailed but her acquittal seems a foregone conclusion. However, her attorney learns she had written Hammond a letter the day of his death telling him her husband would be out all night and inviting him to come by. The attorney buys the potentially incriminating letter from the “Chinawoman,” using the husband, Robert’s, life savings.

The endings of the story and the movie are different. In both, Leslie is acquitted, but the story ends with a subtle scene which shows Robert understands his betrayal and their marriage is finished. Leslie recounts to her lawyer shooting Hammond (six times) and her face becomes “distorted with cruelty, and rage and pain. You would never have thought that this quiet, refined woman was capable of such fiendish passion.” Then, “those passions, . . . were smoothed away as with your hand you would smooth crumpled paper, and in a minute the face was cool and calm and unlined . . . She was once more the well-bred and even distinguished woman.” A moment of epiphany, in the modern storyteller’s style. Hypocrisy, and great melodrama.

But in 1940, we had a motion picture production code, and The Letter failed on two counts—it contained adultery and an unpunished murder. And so in the film, in the last couple scenes, Leslie/Bette Davis finds a knife on the matting on her patio. She leaves it there. Robert abandons her.  When Leslie walks out into the garden, Hammond’s Chinese woman is waiting with an accomplice and stabs her to death.

My film class rabbi (seriously) put forth the proposition that The Letter is William Wyler’s effort at film noir. As supporting evidence, he cites:

Interestingly, I might make the argument that Maugham’s more open-ended short story is true noir. The main character, Leslie Crosbie, is alive and acquitted at the end of the story. But her husband Robert knows the truth and has walked out, the implication to me being that he intends to abandon her. Leslie’s lawyer has burned the letter, but it’s easy to infer that in the society she inhabits, the truth of her affair will seep out and she will become an outcast, shunned by colonial society, like her murder victim Geoffry Hammond had become when he took a Chinese woman for his mistress. Like most noir protagonists, she’d be better off dead. 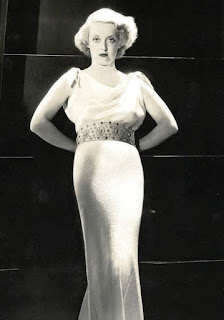 Posted by Harley Mazuk at 1:37 PM No comments: