The Shrinkage of Anthony Bilge

Author’s note: Today’s post is not about writing. I just felt like telling this story that has been with me for 54 years . . .

I attended two schools that required students to pass the Red Cross Junior Life Saving Test to graduate. Yet here I am, not only a high school grad but also a Bachelor of Arts and a non-swimmer.

I’d say I slipped between some cracks at college. During freshman orientation, they gathered us all at the pool and told us to jump in, one-at-a-time, and they would assess our skills.

“Well, we don’t want to do that,” he said. “Just remember to sign up for a swimming class during the next two years.”

I made a note of it, but my follow-up was not so good. Still no one checked to see if I’d met the requirement when commencement came along. Those were perilous times. Four students at Kent State, 15 miles away from our campus, had just been killed four weeks earlier by the Ohio National Guard, and I don’t think anyone cared whether some long-haired freak like me could swim.

High school though, had been a different story. They kept track of things, and in the spring of my senior year, my gym period was in the pool.

Though my memory is foggy and I’ve been unable to verify this, I have a very strong recollection that the school closed the pool and “natatorium” to students of one gender when the opposite gender had swim class. The boys swam without suits. (It was supposed to be the same for the girls, but I don’t know.) Although this seems bizarre now, when I was seventeen and less experienced, it seemed perfectly normal. After all, the school doesn’t want to launder and pass out shared suits, and kids didn’t want to carry a used, wet swimsuit back to English class or stuff it in their lunch bags. 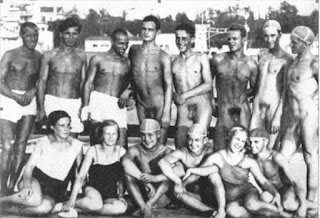 Apparently, some schools the custom was "clothed females, naked men."

Ours was a posh suburb, and our school had a successful swim team. The swimming coach was devoted to the team, but despised us non-swimming schlubs. Coach Barleycorn would toss us a water polo ball and say, “Get in the pool and have fun.” Then he’d retreat to his office, and to the bottle of gin he allegedly kept in his desk drawer, rather than helping us with our buoyancy

Now the school system and my suburb had been very white 12 years earlier when I started my education. The first black kid entered my elementary school when I was in sixth grade. Six years later when I was a senior, we were more diverse, but not much. I’d guess by 1966, the year of my graduation, Shaker Heights was less than five percent black. But of the 25 or 30 senior boys who couldn’t swim, it seemed at least half were black. Side note: I’d been showering with the guys after gym class since fifth grade, and these black fellows were among the first uncircumcised cocks I'd ever seen, the suburb at that time being about 70% Jewish.

I was a bit of an outsider at my school, a very blue-collar gentile amidst the upscale Jews, and I often felt the victim of bullying. I was terrified not only of the water, but of the other kids in the class, especially two black non-swimmers, Bass and Bilge. They were known (to kids like me) as poor students and troublemakers. Bass and Bilge sensed my awkwardness and were quick to tease and pick on me using our unsupervised class time to keep me uncomfortable. I did not learn to swim.

But due to the lack of interest shown by Coach Barleycorn, neither did anyone else. June rolled around and we were still shivering naked on the pool apron or splashing spastically in the shallow end for 45 minutes each week. Long about the end of May, it so happened that maintenance had started painting the ceiling of the natatorium, and there was a scaffold next to the high diving board at the deep end. Coach Barleycorn made an appearance with a class roster on a clipboard and a ten-foot pole. He said, “OK girls, climb up on that scaffold, walk out on the board, and jump into the pool. You'll be fine. I’ll be right here to fish you out with this pole, and I'll mark that you passed the Red Cross test.”

It could have been worse—they could have hung a rope from the scaffold and made us climb that, (rope-climbing had been my first major gym class trauma)—but at least there was a ladder to the top of the scaffold. I climbed the ladder. The connection between “scaffold” and “execution” was clear to me. I took a deep breath and sprang feet first into the air, eyes closed. I enjoyed the feeling of free-fall—my stomach flipped, like on a roller-coaster. I had some confidence that underwater, I would begin to rise, to bob up like a cork, and when my head broke the surface I breathed again and opened my eyes. Coach Barleycorn’s ten-foot pole was within easy reach.

There was nothing left to do. I was graduating. Academic finals were a cinch compared to this ordeal. So I relaxed and watched the others. The last was Anthony Bilge. He climbed up there on the 30-foot high scaffold and began to tremble. Details are lost on a near-sighted young boy who did not have his glasses in the pool, but I recall his taut hamstrings, and his slender glutes as he hunched over at the waist. Bilge was scared stiff. “Jump, Tony,” shouted his friend Bass.

He bent down and steadied himself on the scaffolding. “C’mon, kid. Jump,” yelled Coach Barleycorn. “I’ll pull you out.” Bilge clutched the diving board and started to cry. I could hear the sobs from thirty feet below. It was uncommon for a senior boy to cry openly in school from fear or terror. Bilge’s career as a bully was finished.

I felt vindicated. There were things Bass and Bilge could do in gym that I couldn’t, but at least I didn’t stand naked on the diving board high above my peers, crying.

Bilge was not in my social circle. I never knew if he graduated, though I assume they accommodated him somehow. I didn’t care. He no longer could terrorize me.