Second Murderer: What, shall we stab him while he sleeps?

First Murderer: No; then he will say ‘twas done cowardly when he wakes . . .

Second Murderer: Faith, some certain dregs of conscience are yet within me.

Raymond Chandler quotes the above lines from Shakespeare in his letter to Blanche Knopf, of Alfred A. Knopf his publisher in the summer of 1939, reporting progress on his novel-in-progress, The Second Murderer. A year later, he had dropped that working title. The Second Murderer was to become Farewell, My Lovely.

Like other Chandler novels, Farewell, My Lovely (FML) (1940) was based on, cobbled together, or “cannibalized” (Chandler’s term), from three of his previously published stories—“The Man Who Liked Dogs” (Black Mask, 1936), “Try the Girl” (Black Mask, 1937), and “Mandarin’s Jade” (Dime Detective, 1937). Those latter two were Chandler’s only sales in 1937, and as such appear to be his sole source of income for the year.

Chandler had not yet developed the name Phillip Marlowe when writing the short stories. The detective in the first two was named Carmady, no first name given. The detective in “Mandarin’s Jade” was John Dalmas. But they were all Marlowe-in-training. Philip Marlowe—Chandler’s white knight, who was to be the best man in his world, and a good man in any world. Carmady and Dalmas narrate their stories in a similar first-person voice, with the same cynical sense of humor that Marlowe would later employ. They have a tough time hewing to their knightly chivalry in a world of gambling, booze, drugs, double-crosses, and most of all corruption. But they never stray from their personal code.

The plots of the individual stories have some twists and turns, but each plot feels resolved at the end of the story. In “The Man Who Liked Dogs” (TMWLD), Carmady is trying to find a kidnapped or runaway teenage girl, Isobel Snare, who was last seen with her large police dog. Carmady traces the dog to a machine-gun toting killer, Jerry “Farmer” Saint, the man who liked dogs. Carmady is hit on the head and comes to in a private psychiatric hospital, where the corrupt police chief keeps inconvenient people locked up and shot full of hop. He busts out and finds Isobel, who has secretly married Saint, on a gambling ship outside the three-mile limit.

“Try the Girl” (TTG) opens with Carmady down on Central Avenue, where he meets a giant of a man in exceptionally loud clothes, Steve Skalla. Steve just did eight years in the joint, and he’s out, looking for his girl, Beulah, in Shamey’s, a dive where she used to work. Shamey’s is under new management, no longer a white establishment, but a spot for the “colored folks.” Skalla gets too rough with the boss, and flees, hiring Carmady to find Beulah. Carmady’s search leads him to Shamey’s widow, an old lush. She’s heard Beulah singing on radio KLBL under a different name. Detective work at KLBL leads Carmady to Beulah’s house. But by the time Carmady arrives, Skalla has already found the house and killed the radio station exec who was having an affair with Beulah. The radio executive’s pre-psychotic widow shows up and pumps four .25 caliber slugs into Skalla’s belly. After they take him to the hospital, Beulah comes home. Carmady beats her up, so that she can say she shot the radio station exec in self-defense.

"Mandarin's Jade” (MJ) tells the story of a late-night ransom exchange for a jade necklace, during which p.i. John Dalmas takes a sap to the head, and he loses his client, Lindley Paul. (Lindley, by the way, lives on Quinonal Avenue in Castellmare, at the top of the 270 steps behind Thelma Todd’s sidewalk café. Dalmas climbs them.) 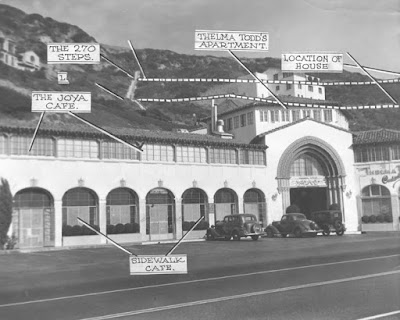 Castellmare in "Mandarin's Jade"
Montemar Vista in Farewell, My Lovely

Paul was carrying a cigarette case of special rolls—possible jujus—and those lead Dalmas to Soukesian the psychic. Soukesian chloroforms Dalmas, who shoots a foul-smelling Hollywood Indian. He meets Mrs. Philip Courtney Pendergrast, the young, blond, hard-drinking wife of a very old, very rich man. Mrs. Pendergrast owned that jade necklace. In a barfight, Dalmas is hit on the head with a full bottle.

If you see a coherent thread that runs through these three stories, you’re doing better than me. But consider that Chandler was more interested in writing and language, and in character than in a coherent plot. His success stitching the stories together reminds us that scenes are indeed the building blocks of fiction. We open with the scene from TTG in which Philip Marlowe (Carmady) meets Moose Molloy (Skalla) looking for his girl Velma Valento (Beulah) at Florian’s (Shamey’s). The action is essentially the same—Moose busts up the joint.  This is a great opening scene, and Chandler has pumped it up from five and a half pages in TTG to thirteen and a half in FML. The descriptions in FML are similar, but richer in detail. The characters’ names have changed, and they have more depth.

After leaving Central Ave., Marlowe does a little detective work, and then we have the FML version of the scene in which he questions the hard-drinking widow, Jessie Florian, (Violet Lu Shamey). Later that afternoon, back in his office, he takes a call from a prospective client, Lindsay Marriott, (Lindley Paul of MJ), and we’re off to Marriott’s house—same as Paul’s house, at the top of the steps behind the sidewalk café. Marriott needs a bodyguard for his errand that night, making a payoff for a stolen necklace of Fei Tsui jade. Later that evening, in a deserted canyon, Marlowe waits in the dark and takes a sap to the head from behind. When he awakes, Marriott is dead.

How does Chandler connect Marriott and the stolen necklace to Moose and Velma? That’s one of the mysteries you can ponder for the next 200 or so pages. Basically, Chandler simply drops the scene with Marriott's murder into the story of Moose and Velma.

It’s not long before the calling cards packed in with Marriott’s special rolls lead Marlowe to Amthor (Soukesian) the psychic. Amthor calls the cops claiming Marlowe tried to blackmail him, but instead of taking him to jail, they knock him unconscious and lock him up in a private hospital run by Dr. Sonderborg (Dr. Sundstrand in TMWLD), a drug dealer who keeps him docile with heroin or morphine  injections.

Chandler combines these disparate plot threads simply by dumping the scenes from the three short stories together and making the characters consistent throughout. Sure, Farewell, My Lovely is about Moose’s search for Velma, a second murder, a psychic, a drug dealing doctor, corrupt cops, a gambling ship, another murder, a ravishing blonde with a secret past, a corrupt police chief, a gambler who runs a corrupt city government, a double cross, and a fourth murder. It’s about scenes that probably have no business being together. If the novel seems consistent and lucid, it’s because the scenes are so well-written and the characters so much fun and so real, that the reader gets the overall impression of reading a swell, coherent novel. As Chandler said of his work, "my whole career is based on the idea that the formula doesn't matter, the thing that counts is what you do with the formula; that is to say, it is a matter of style."

Looking at the way I write and the way Chandler stitched the scenes from three divergent plots together, I’m thinking of trying the technique myself with some of my unsold stories.

P.S. Who is the second murderer? That’s one of the mysteries of the book I won’t spoil, but the Second Murderer is the one who killed Lindsay Marriott.