The Development of a Story 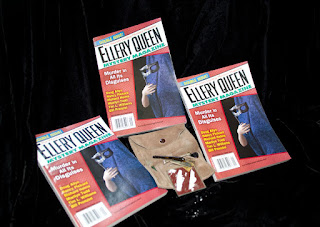 I went in and out of Peru in 1984. It was quick. I left no traces. I loved it. I attributed my clean sneak to reading the South American Handbook and heeding the warnings.
I was a single man then, and I met two single dames, fellow travelers. Libby and Maureen, a tall brunette and a short blonde. Both were swell. We were all on separate tours, but our character arcs were interwoven. I'd spend time with one in Lima, another in Arequipa, and so on. The girls were never in the same town, but there was usually one where I was.
I had some wonderful moments rattling along on the train through the Urubamba River Valley. I spent the night at the sanctuary hotel in Machu Picchu, back before it was a Belmond property. Ran into a little trouble in Arequipa, but nobody got hurt.
When I returned to the Black Lizard Lounge, I tried to write a short atmospheric travel vignette about it. I thought it was a decent first piece in an engaging voice. But no one wanted to publish my short travel vignette, no matter how atmospheric. I held on to it in here, where writers hold on to their stories.
I began to write private eye fiction in 2005. I decided to revamp the Peru travel piece--weave it into a noir tale. That version flopped, derailed by an online writing workshop when something I wrote garnered this feedback (true quote): "That really got my hackles up!" And that comment degenerated into an online thread of two-weeks duration entitled "Nipples." "It was chilly that morning in Cusco," I told them. They didn't want to hear it.
Well, thanks to EQMM, I began to have a little success with my series private eye character, Frank Swiver. I showed Frank the Peru material.
"OK, I'll do it," he said.
"This is just the old version. You haven't even seen your role yet. I haven't written your lines."
"Doesn't matter," said Frank, putting out his Camel in my Tommy Bahama ashtray. "I like the dame in it."
Frank's always been a rogue, and he recognized a rogue-ish part when he glammed onto one. So I wrote the story for Frank.
Going through the material again helped me get some things clear in my mind. Like an ending, and a less muddled middle. Frank really straightened the story out for me.
I thought it was swell stuff now. I showed it to a few old pals as a sanity check. The pals "got" the story, and seemed to sincerely like it, too. I showed it to three writers. The writers unanimously condemned it.
Writer 1: "Your p.i. has lost his moral compass."
Writer 2: "He has no moral compass."
Writer 3: "We hate your protagonist. We'll never read another Frank Swiver story."
That didn't move Frank. "Hey, I did what the client asked, didn't I? It's a job."
"I'm taking you off the case, shamus," I said.
"You can't do that."
You can let your characters take you all over the map in a story, but you can't let them tell you what to write. I took Frank off the case. But now, who to give it to? There weren't many dicks in my bag of dramatis personae. I reached in and pulled out a Basque-American from Boise, Igor Oxtoa. Igor'd been working the other end of Post Street from Frank for a couple years, and was ready for prime time.
Frank has had some good fortune with the women in my stories. But Igor has never had any luck with dames. He's shorter, stockier, and just not a smooth operator, like Frank. But that added a new dimension to the seduction. It was fun writing, but more importantly I think folks could be more sympathetic with Igor than they were with Frank.
I sent it in to EQMM last August. "Too much explicit sex," was the reply. D'uh. I knew that! I don't know what I was thinking, sending an R-rated piece to Ellery Queen. All I can figure is brain fade.
"What if I take out the explicit sex? Would you read it again?" Yes!
I sent off the PG-13 version. EQMM came back, "You need to cut back on the drug use."
"What do you mean? I quit years ago."
"In the story, bright boy."
Arrrgh! There is a murder, a stabbing, and an unnatural death from a train, but cocaine smuggling is the crime that drives this tale. It was tough to clean up the coke and keep the story line on track. The interesting thing though about working with Janet Hutchings, each time after I made requested changes, I had a better story, with pace, tone, dramatic scenes and a fine balance. Best of all Igor and the rest of the cast were giving me 100%. The little Basque was a natural. He took to the scenes like a llama takes to the Inca Trail.
Intended result: EQMM and I finally agreed on a story, "Courvoisier and Coca Tea," and it will appear in the Sept. / Oct. double issue as the Black Mask feature.
Unintended consequences: my wife has planned a family trip for us to Peru in July.
We get questions all the time here at the Black Lizard Lounge. "That's quite a story. How long did it take you to write it?"
Let's see, I started in 1985, so about 20 years, I guess. I wasn't working on it the whole time though . . .

Posted by Harley Mazuk at 5:37 PM No comments: