That's a quote, (or as near as my notes come to one), from my instructor in Literary Detective Fiction at the Catamaran Conference, John Straley. He lives in Sitka, Alaska, and seems to be big on ecology and the environment. With John, it's not just a "shave the whales," thing, though his wife Jan is a marine biologist and the two of them have a non-fiction book coming out, something along the lines of Cannery Row to Sitka, Alaska: Ed Ricketts and the Wave Shock that Forged the Coast. No, the point I was heading for is that John thinks ecology is about place and all good writing should come from place, setting. Character is influenced by and should all be rooted in the setting. Plot should be based in landscape.
John's latest crime novels are with Soho Press, which publishes crime in foreign locales (such as Cara Black's Paris mysteries), and nothing seems more foreign to me than Alaska. In Sitka, they have 200 inches of rain a year. Last Oct., John says, they had 30 inches of rain--an inch a day. I asked him if that was just rain, or precipitation, and he said "Rain. It doesn't snow much in Sitka." As a writer, John's fine with the rain. "In the rain, surfaces are shiny, poppy, and vivid."
Straley doesn't think that crime writers should be disrespected because of their genre. "The crime genre can be just as psychologically rich as anything else. It just has to be revealed in action."


I read The Big Both Ways before going to the conference. It's a good novel and John's a fine writer. I liked the '30s setting and the backdrop of labor unrest and violence.
Photo of John in Pebble Beach by the Blogger: 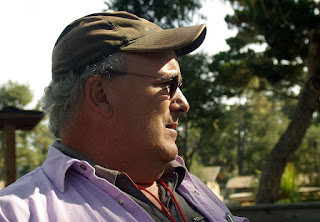