Reading The Magus by John Fowles

“A lot of people” have written about their pandemic activities. Some catch up on housekeeping—disposing of evidence forgotten in the basement these last twenty years, replacing the front rotors on the ’67 Porsche 911, or burying the cat. There are self-improvement types—they learn Mandarin, bake sourdough bread, or start on that Charles Atlas course they bought off the back of a comic book. They take online classes or write a memoir. Some of my more literary acquaintances say, “I’ve always wanted to read War and Peace (or Ulysses), and now I finally have the time.”
As a retired person, I don’t find myself with more discretionary free time than I had pre-pandemic. But I do have this book that I’ve wanted to read for more than fifty years and have never managed to get traction in—The Magus by John Fowles. Will 2020 finally be the year for The Magus and me? I really loved the 1965 movie The Collector, based on Fowles’s literary debut of the same name. All right, I admit, my 16-year-old psyche was transfixed and inspired by the beauty, vulnerability, and toughness of Samantha Eggar (Victoria Louise Samantha Marie Elizabeth Therese Eggar to her close friends). I also enjoyed the cunning psycho played by Terence Stamp, (just as I used to enjoy Oliver Reed, Alan Bates and other moody Brits who appeared in British-American films of the era). I  bought the book, The Collector, and it was a swell read. So when The Magus came out in ’65, I was eager to read it. 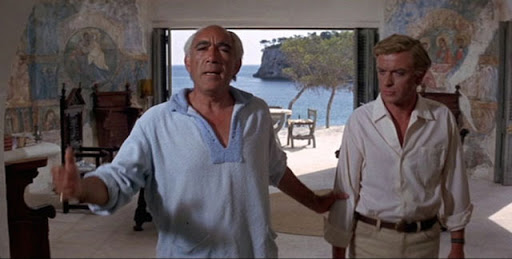 Anthony Quinn as Conchis; Michael Caine as Nicholas Urfe
I think The Magus was the first book I ever tried to read that I found too difficult to finish. There had been plenty of novels during my distinguished career as an English major that I threw across the room (Great Expectations), or bailed on and read the Cliff’s Notes (Moby Dick). Nonetheless, I thought I was a pretty bright kid, and had never met a novel I couldn’t beat. But The Magus was a challenge. First off, it is long. My current volume (I’m reading Fowles 1977 “revised version”) is 656 pages, and I’m a notoriously slow reader. Secondly, it’s a “literary” novel, not a thriller like The Collector, so it’s a bit of a slog. But it’s supposed to be good—The Magus made the Modern Library’s list of 100 best novels, and hit #67 on the BBC’s “Big Read” chart. Above all though, it is a mystery, which is perhaps one reason I’ve stuck with it.
Literary slog or not, there is discernible action, but the plot tends to get murky at times, not in the least because Fowles is introspective and wordy. A young man, perhaps in his late 20s, Nicholas Urfe in jolly old England has a brief affair with an Aussie girl, Alison. He doesn’t think he loves her and seeks to get away. He takes a job teaching English at a boys’ school on a Greek island, Phraxos, and there he meets—what else—a wealthy Greek, Conchis. Conscious—oops, pardon me—Conchis (about 60 years of age?) lives in seclusion on Phraxos, and there are hints Conchis may have betrayed Greek partisans or collaborated with the Nazis during WWII. Conchis invites Nicholas to his secluded house, Bourani, where he entertains him with stories of his life. Conchis—and Fowles—also engage Nicholas in an abundance of philosophy, psychology, misdirection, and trickery. Nicholas meets a beautiful twenty-ish girl, Lily, at Bourani, who Conchis says was his lover during WWI. At night Conchis tells stories, while ancient gods, like Apollo, chase Lily through the garden with erect phalluses.
Why do I keep trying to read this book? Well early on, I connected with Nicholas Urfe. Although he’s a bit of a self-centered bastard, Nicholas seems to be Fowles’ Everyman. He has a degree in English lit, like me, and he’s young, apparently handsome, and scores with the dames. But none of these things satisfy Urfe. He’s also disillusioned, depressed, even suicidal.
Where will Conchis and Lily lead Urfe? I’ll have to read on, but one thing I know—after college, I would have liked to have gone off to a Greek island to teach English. Further enticement: there’s an appealing undercurrent of eroticism throughout, and an exotic setting to match. And the reader wonders, who is Lily really?
Yes, The Magus is a mystery. I have tried to read this book at least three times. Once I gave up while still in England. A couple times I got to Phraxos. No matter how far I’ve read, I can’t figure out what will happen next. So I read on. This time I have the help of recorded books, and hearing The Magus read aloud seems to help unpack its density. This time, I’ve read further than ever before, and I've climbed Mt. Parnassus with Nicholas and Alison. This time I think I’m going to make it to the end.
The ancient Greeks say that if you spend the night on Parnassus, you’ll either become inspired or go mad. Perhaps reading The Magus to the end will have similar results.
Have you ever read The Magus? What's your pandemic reading?
Posted by Harley Mazuk at 12:42 PM No comments:

I’ve been writing a series for some years now about a private detective named Frank Swiver, who walks the mean streets of San Francisco circa 1948-’50 (so far). I became comfortable using private eye and noir tropes, such as

Last year, I began to think, how did Frank become a private dick? Kind of like a comic book superhero origin story. I took an opening shot at it last year in “The Road from Manzanar,” (Ellery Queen Mystery Magazine, March-April 2019), set way back in 1942. In “Manzanar,” Frank, a pacifist ever since his experiences in the Spanish Civil War, is trying to convince the draft board he’s a conscientious objector. Well, stories sometimes take the writer places he hadn’t planned to go, and this one turned out to be a fun, complete adventure before I ever got where I was headed about the origin of Frank’s Old Vine Detective Agency.

But I was headed for a time before “Manzanar,” when Frank took the first steps on his ultimate career path. It happened in Spain in August 1937, when he did a little investigating while he and the Abe Lincoln Battalion were bivouacked around Bujaraloz, preparing for an offensive against Zaragoza, capital of Aragón. This month I wrote a first draft of that story, “Friends of Durruti.” It was great fun writing, even though I found myself adrift in new sub-genres—a bit of Hemingway-war-drama/romance, and a bit of Alan-Furst/Somerset-Maugham-espionage/intrigue. Whatever it was, it did not use all the same tropes as stories from P.I. Central.

By tropes, I mean plot, character, or setting expedients that help make the story run, and that the reader recognizes as a device or trope. What I like about tropes is the familiarity. In a P.I. story, I can describe a mysterious woman as tall or short; but either way, if she’s the femme fatale, the reader knows she has gams and they’re long enough to reach the ground; whether she’s a blonde or a brunette, she has desires for sex, money, or escape from the constraints of her life—uncontrollable, all-consuming desires that will lead to her destruction, (and if he’s not careful, to the P.I.’s demise, too).

Here are a couple tropes that you won’t find in “Friends of Durruti:”

Some things remained the same, or similar. Frank’s style, language, and fashions tend to be anchored in the 1930s and 1940s. In Spain, he’s traded in the shabby gabardine suit, trench coat, and fedora of his future P.I. days for a mismatched and shabby uniform (and fedora). He can’t get fresh Camels, so he rolls his short unfiltered smokes with Spanish Picadura tobacco.

Other tropes remained. I continued to write about Frank’s struggles with demon alcohol. (Is that a P.I. trope or what?) Frank’s friend Max brought him to fight in Spain to get him away from the wino tendencies that were causing him to slip into darkness. But his deep and intense relationship with alcohol continues in “Durruti” as the femme fatale introduces him to absinthe—legal in Spain.

And the femme fatale, one of my favorite tropes—we have one in Durruti. Felina, a dame driven by loneliness, sex, and desire for a better life. Frank must determine—is Felina a good Catholic girl? Or a duplicitous cortesana?

A not uncommon trope of mystery/P.I./noir fiction is characters haunted by the past. A slight twist in this story: Frank is living the past that will haunt him in his P.I. days.

And some things barely changed at all. Frank’s a tough, cynical guy with street smarts. Not strong in deductive reasoning, Frank solves mysteries with dogged persistence.

Perhaps the main trope in “Friends of Durruti,” is not from the P.I. sub-genre specifically, but from noir--disillusion, pessimism, and the unhappy ending. In Frank’s noir-ish P.I. world, his quest to solve a mystery often leads him into a shadowy world of betrayal in which clients and criminals can blur. In Republican Spain in August 1937, Frank and Max fought for the Second Spanish Republic, whose military consisted of all manner of left-wing militias--Socialists, Communists, Anarchists, Social Democrats, and Trotskyites, along with the International Brigades, all led by Soviet officers and Spaniards trained by the Soviets. Their enemies were the Nationalist army of Spain and the Spanish African troops, the fascists, Falangists, Carlists, Requetes, and Catholics, and the Italian troops sent by Mussolini and Hitler’s Condor Legion. Frank Swiver’s allies and his enemies blur among the complex and shifting alliances, and he and Felina do not live happily ever after.

Posted by Harley Mazuk at 12:58 PM No comments: