After dithering about the contract for an excessive amount of time, I accepted today New Pulp Press’s offer to publish my second Frank Swiver novel, tentatively titled, Last Puffs. Chuck Newman at New Pulp was very patient with me, and yesterday put my mind enough at ease to sign the contract. It helped that he seemed genuinely enthused about publishing Last Puffs, and that makes an author feel good. 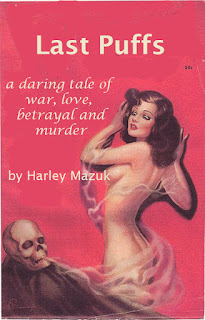 Last Puffs is not a sequel to White with Fish, Red withMurder, in that it doesn’t pursue the story line of Vera Peregrino and Frank. Vera doesn’t make an appearance in Last Puffs, though she was in an early draft. Frank is responsible for two daughters, and though he and Vera were on the outs, she was the only friend he could think of to ask if she could watch the girls for two weeks. But I wrote her out when Bimla, one of the working girls from the Lotus House moved in with Frank at the end of Part II.

During the year or two I worked on Last Puffs, I was discovering that some of my favorite Raymond Chandler short stories were long by today’s standards—”Red Wind,” “Goldfish”—about 15,000 words each. I learned that The Maltese Falcon and Red Harvest were serialized in Black Mask magazine. Each appeared in 15,000-word segments over four issues. The Dain Curse was another novel that could be divided into four linked stories. I decided to write Last Puffs on the model of The Dain Curse, admittedly not Hammett’s best work, but I like the structure.

We open the book in "Aragón" in 1938. Frank and his best friend Max Rabinowitz are fighting in the Spanish Civil War on the side of the Republic. They meet and both fall in love with Amanda Zingaro, a beautiful and courageous Republican guerilla.

Part II is “The Girls from Nanking.” It is now late 1948. Frank is trying his hand at being a private eye. Max is a successful criminal attorney. Frank takes a case for Joan Spring, half-Chinese wife of a wealthy banker. He resolves it, though client Joan ends up in jail on suspicion of murder. In the spring, Max abruptly abandons his practice and moves to . . . Fresno.

And in “We’ll always Have Fresno,” (Part III), the boys are reunited with Amanda who was working in a Fresno cigar factory, plotting revenge against the fascists from her home village that she has tracked to California.

It all comes together (or comes apart for Frank) in Part IV, “Last Puffs.” Will Frank be a good father to the ten-year-old boy Amanda says he fathered? Why does the lad look like Max? Who shot Max in Fresno? Will spy Joan Spring escape to Red China? Can Frank help Amanda on her mission to avenge her father when he’s sworn off violence? Can he protect her from the sadistic Veronica Rios-Ortega who seeks to eliminate any witness to the murder of her husband?


Join Frank Swiver and me for Last Puffs, from New Pulp Press.
(http://www.newpulppress.com/)
Posted by Harley Mazuk at 8:09 AM No comments: